In "Valgovind's Boat Song" a rower observes his working landscape, and offers his opinion on the river or "fruitful mother" vs. the sea with her "cool green lips".  This calm piece strikes me as one of simple enjoyment - the joy of singing, of lyrical poetry, of a day's labour passing lighter in song, the rhythms of the river, oar and wave.  There is a sense of beauty in joining a landscape which includes men's voices calling artfully along the vital arteries of flowing water.  Beneath the surface is a desire for a longer journey - the universal pull all sailors have for the sea.

Prior to the modern era, travel by water taxi was not only indispensable to commuters along India's waterways, it must have been a refreshing and cooling option to the unthinkable heat and dust of the road.  Like working people all over the world, the boatmen had their own ancient work songs.  No one begrudged such a worker the pride he took in his well-muscled arms,  his honest enjoyment of his own voice, musical and honed with daily exercise.  Those gondoliers with creative hearts must have made up unique signature songs, useful for calling out to customers or to especially comely women.   (A discussion of Hope's "Valgovind" as boatman Krishna with his female Gopis may be found here.) 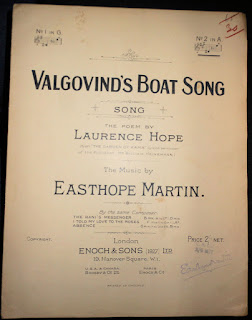 The number of boatmen and onboard trysts in Hope's works gave rise to a reading-club rumor that the poet must have formed a liaison with a particularly handsome specimen of boatly manhood.  I confess that this old rumor has given me an unusual interest in scrutinizing pictures of Indian river skiffs, trying to figure out if - and just how - they might accommodate such indiscretions.  Of course, it may have simply been the special combination of freedom and plaintive desire in a humble and oft-heard river song that served as her muse.

Something in the poem inspired composer Frederick John Easthope Martin to set it to music in 1911, and it became popular enough to be included in the 1913 summer season of "The Proms" in London on September 10, performed by soprano soloist Dora Gibson and Frederick Kiddle piano.

According to Wikipedia, Promenade concerts had existed in London's pleasure gardens since the mid 18th century, and indoor proms became a feature of 19th century musical life in London from 1838... The annual series of Proms continuing today had their roots in that movement. They were inaugurated on 10 August 1895 in the Queen's Hall by the impresario Robert Newman, who was fully experienced in running similar concerts at His Majesty's Theatre. Newman wished to generate a wider audience for concert hall music by offering low ticket prices and an informal atmosphere, where eating, drinking and smoking were permitted to the promenaders. He stated his aim to Henry Wood in 1894 as follows:


'I am going to run nightly concerts and train the public by easy stages. Popular at first, gradually raising the standard until I have created a public for classical and modern music.'

Indeed, the program that evening indicates that the boatman's song rubbed it's working class elbows with compositions by the likes of Wagner, Liszt and Dvořák. 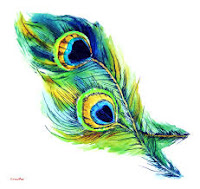 L. Hope is listed today as the "lyricist" of Easthope Martin's composition on MusicBrainz website, and the sheet music in "8 pages on heavy paper" was still printed as late as 1827, as indicated by this copy for sale today on ebay.

NOTE:  "Valgovind's Boat Song" is recorded in the second section of India's Love Lyrics and may be listened to here..  This is a sneak preview, and will not be available  on Librivox until the entire book has been recorded.