She is glad to receive your turquoise ring,
Dear and dark-eyed Lover of mine!
I, to have given you everything:
Beauty maddens the soul like Wine.

"She is proud to have held aloof her charms,
Slender, dark-eyed Lover of mine!
But I, of the night you lay in my arms:
Beauty maddens the sense like Wine!

"She triumphs to think that your heart is won,
Stately, dark-eyed Lover of mine!
I had not a thought of myself, not one:
Beauty maddens the brain like Wine!

"She will speak you softly, while skies are blue,
Dear, deluded Lover of mine!
I would lose both body and soul for you:
Beauty maddens the brain like Wine!

"While the ways are fair she will love you well,
Dear, disdainful Lover of mine!
But I would have followed you down to Hell:
Beauty maddens the soul like Wine!

"Though you lay at her feet the days to be,
Now no longer Lover of mine!
You can give her naught that you gave not me:
Beauty maddened my soul like Wine!

"When the years have shown what is false or true:
Beauty maddens the sight like Wine!
You will understand how I cared for you,
First and only Lover of mine!" 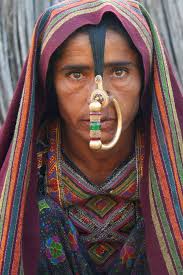 I have searched yonder and near to find any verse or song form in English or Urdu that matched the very simple, very strong repeating structure of this poem. Baudelaire and Swinburne each wrote a dark poem that employed a repeating end line to imitate the power of religious rituals, but these poems can not be said to have inspired this one.  The repetition of the nursery rhyme "The House That Jack Built" is thought to be modeled partially at least on an old Arabic form, but it's style of formation holds no connection to this "Gipsy" song.

These metered quatrains with the second and forth lines repeated with slight variations and flipped in the last stanza are not a form found, as far as I can tell, in any particular tradition, and it must be concluded for now that the poet was either simply enjoying experimenting with repetitive songlike forms, or recording some type of song form overheard on the street, in her travels, among the soldier's camp followers or otherwise encountered "in the wild".

The repeating line "Dear dark eyed lover of mine!" with it's variations of stately, deluded, slender, etc, and "Beauty maddens the soul like wine!" with its variations of sense, brain and past tenses, work together over seven quatrains to create a singular and striking effect.  These two repeated sentences are the only ones punctuated with expression marks, and their continual ringing out is somewhat like a tolling of the bells of  doom.  They provide a sense of inevitability to the poem - the intoxicating effects of Beauty are inescapable!  You are dear but deluded, and slender but disdainful!...the excited and strident dirge rings on... 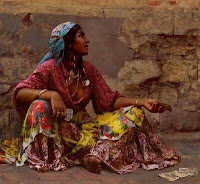 In fact this poem may, coincidentally or not, have more in common with Edgar Allan Poe's systematically insistent "The Bells" than anything else.   Whether Hope admired Poe is not a topic I can argue at present, but suffice it to say that Poe was dead by 1848, his work long unleashed upon the world before Adela Cory was born, and his influence is possible.

The last stanza flips the form of the poem, but not the meaning - in other words it is not a true twist.  However, changing the Beauty line to the 2nd place and the modified "Lover of mine" line to the 4th place adds interest, and emphasizes how much our fierce "Gipsy" narrator still wishes to assert her rights over her Beloved. 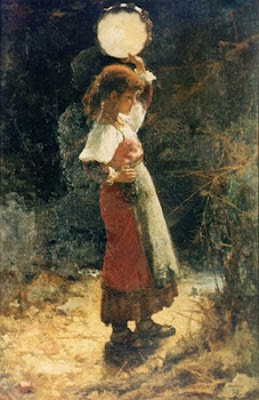 It could be assumed that the entire piece is simply a product of the poet's imagination.  However, significant research now exists which posits that it is exactly the area discussed in the upcoming poem "Lost Delight" - the long disputed and invaded region between Persia and India - that may have been the original homeland of the "Gipsies", rather than Egypt, Italy or Eastern Europe.  It is argued that after serious invasions, especially by the Turks, the populations living in this area of Central Asia scattered, largely moving through Eastern Europe.  In fact the study goes on to discuss how Urdu itself was a language that developed through the necessities of having a polyglot language to communicate with forced and mercenary armies of locals raised in the area by the invading rulers, starting long before the British were there, who capitalized on Urdu as "the language of the army" as well.

Thus in this poem we may be actually hearing an artifact of authentic Gypsy culture alive and belted out in camp one evening in the late 19th century, in a tradition that survived several ages of  tents pitched and struck by passing armies that inevitably faded away as empires crumbled in succession.

Such ancient vocalizations would captivate the soul of any poet, especially our Violet, whose senses are no more resistant to Beauty than the lost lover of the song.

NOTE:  "Deserted Gipsy's Song" is recorded in the fifth section of India's Love Lyrics and may be listened to here.  This is a sneak preview, and will not be available  on Librivox until the entire book has been recorded.
20.2.18