The Teak Forest - Refreshment in Babylon

The Teak Forest is a compelling piece placed just a few poems into the Love Lyrics - a wise placement that insures that casual readers may flip to it readily.   That is exactly what happened to me one afternoon in a West Hollywood mecca near the turn of the last century.

I was one of LA's working poor, and that week I had perhaps thirty dollars to pay for food and entertainment after paying all my bills.  But despite this inconvenience I was quite happy, high strung, and poetically turned on - I had become a devoted neophyte poet writer just prior to my thirtieth year, having undergone a conversion of sorts which resulted, to my astonishment, in causing me to produce copious amounts of rhyming verse.  This was due to a psychedelic mushroom experience I had for several hours while exploring the grounds at Greystone Mansion on my own one November afternoon and evening.  An essay detailing this ecstatic, transformative experience can be read in an appendix of my book "Chimera".

One of my favorite free pastimes was looking through the used books at the now defunct but still quite famously beloved Bhodi Tree Bookstore in West Hollywood.   The Bhodi Tree fed Angelenos' voracious appetites for spiritualist material by providing the best, newest and must up to date books on consciousness available to man and womankind.  But they were not elitists and also had a quaint wooden house in the back stuffed with inexpensive used books.  Even better, the used store had a happy habit of maintaining a $1 book shelf outside, with a seat in the shade where you could sit and read the titles that were too mundane or eccentric for even them to hang on to.  Unlike the frontside store, the used one seemed to cycle through a lot of literature in addition to occult and spiritual titles.

For $5 I could treat myself to five unknown worlds, from classic paperback novels to fantastic screeds on crystal power and alien agendas.  I confined myself religiously to the safety of this outside sale shelf, so as not to get caught up in the more costly delights of the interior.  To actually browse the new books in the main Bhodi Tree store was unthinkable on my budget.  Any deviation from the $1 shelf could mean trouble, and I was a good girl because I was a poor girl.  But there were compensations in the main store - you could read pretty much as long as you wanted in comfy chairs scattered in thoughtful corners, and they gifted their customers with herbal tea and soft, unearthly music.  The main store also had incense from Japan and India, statuettes of gods and devas, magical jewelry, Ayurveda treatments, Himalayan salt candles, prayer wheels, crystals and countless more curated indulgences for the spirit.  It was a slice of Nirvana with two dollops of Heaven on top.

Standing in line to relinquish a couple of bucks for my dollar books one average sunny day, my eye was teased by a beautiful cover turned outward for display -  the now familiar "peacock" cover design of India's Love Lyrics.  Drawn to it, I opened immediately to "The Teak Forest" and read it straight through.   Caught off guard, I became emotionally choked up, lachrymose, even slightly indisposed.  Here was a true poet!  The realization was a small shock.  Knowing I couldn't afford it, I forced a quick look at the price - something like $25, used.  Might as well have been $250, it was basically my entire food budget for a week!  Ah.  Trouble had found me.  I had to put it back.  But then, I also had to read the jacket.

The publisher had done his job well.  I read, like we all did at some point, that the writer was a tragic, grief besotted female poet who had poisoned herself over her husband's grave.

Then and there, I surrendered.

I threw the book onto the checkout counter in disgust at my recklessness.   But really, who cares about food!?  If this woman could suffer like that, surely I could a little too.  Besides - at the end of the week, I'd still have the book, and wouldn't miss the food anymore!  I laid 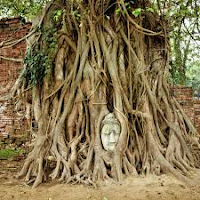 down almost everything I had, and should have given my leftover five dollars as well - in gratitude to The Bodhi Tree, for bringing me to the everlasting well that is the poet Laurence Hope.

Of course we all find out in time that the description of her suicide wasn't accurate, but then it's not so extremely far off either.  My own poetry became deeply influenced by Hope's lyricism, voice and content, as did my best friend and fellow poet.  You see, a few days after discovering her, I brought the book to my friend's doorway one sunset evening.  Mathew didn't like unscheduled visits and reluctantly let me in.  I read The Teak Forest out loud and straight through without any further explanation. 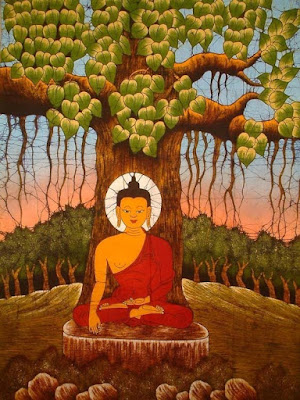 Mathew was visibly moved.   He became animated and lifted out of his day's funk.   We talked about and read aloud from the book for several hours that night.  Later he told me that he had been profoundly infused with a sort of energy that came from Hope's spirit, transmitted through her words.   A few years later, he presented me with one of his beautiful, musical, intuitive poems, which describe his experience that night.  Because I had been the messenger, I too had been imbued with the true ray of poetry in his eyes.

I believe that Hope's clear, convulsive and honest passion acts like a catalyst for some listeners, restoring in the moment a sense of calm and relief from personal cares.  It is as though she channels a superpower of true catharsis through some of her work, through her own personal catharsis experienced and notated so long ago, but undiminished with distance or time.

My friend Mathew fell further under the spell of Hope over our two decade friendship built on sharing our verses with each other.  He wrote beautiful inspired verse especially on the moon, the sea, the wind, and death of love.  I came to feel that a poem of mine was not really "born" until Mathew had heard it, and had given me his deeply insightful take on it.  He carried a flame in his heart for Hope and the effect of her words, which he took with him to his own untimely grave.

A hundred years after Hope published "The Teak Forest", it inspired this poem by Mathew -

Poem to Poetry
To Helen

No greater romantic ever tread
The paths that approach my door
Greater even than the moon and sky
Without your words to describe them
What good are these for?

~ But like sleep your rhythms made
The weariness of the day's deeds fade
And the timing of my breath, you played
While silent at the core

~ But like sleep your rhythms made
The weariness of the days deeds fade
And the timing of my breath, you played
While silent at the core 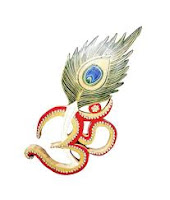 Feb 10 , 1999
©OmTheory@aol.com - Matthew Stull
May not be reprinted without  written permission


NOTE:  "The Teak Forest" is in the first section of India's Love Lyrics recorded for Librivox and may be listened to here.  This is a sneak preview and will not be available until the entire book has been recorded.
19.10.17