The last line speaks of an unbreakable but graceful union of elements.

These two gorgeous stanzas may lead a reader to seek further insight into the Sufic side of Hope's works, as I did. This caused me to stumble in the darkness onto "Adonis" - a celebrated poet of the Arab world. I find his book "Sufism and Surrealism" fascinatingly on topic, with a discussion regarding Oneness, as expressed through language and poetry, including an unexpected viewpoint on Rimbaud's work.  Intriguingly, at some point I intend to discuss the camaraderie between Rimbaud's "drunken boat" with Hope's "broken boat" of "The Teak Forest", both published in that last explosion of decadent beauty and cynicism characterizing the fin de siecle.

-The perfect Music for your reading-

Complete unity is elegantly expressed in the concept of gold forming the bracelet, water forming the wave, and is discussed in Anindyo Roy's excellent essay on Hope, which takes the phrase as its title.

And now, without further delay, an excerpt from Adonis' "Sufism and Surrealism" (Pg. 10) to ponder and make our senses reel with excitement and possiblity (at least mine did) while allowing a glimpse of what may perhaps be the underlying foundational philosophy of Hope's canon. 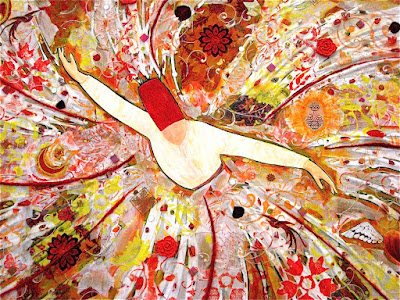 The system of expression or speech, in the framework of our immediate, manifest world, is what the traditional, apparent "I" practised, and is a system imposed by establishment, usage and consensus.   The system of expression employed by the invisible "I" negates everything that is established.  It attempts to glean the unknown, and abstract, the dynamic, that which is beyond tradition and customary usage.

Piercing the world of the manifest cannot be achieved except by piercing its established language.   Thus it is possible for us to attain something new by using a new language.  In this sense, we see how a new form of poetry can be achieved only by destroying the established and habitual system of meaning and how we can arrive at the truth only by going beyond the orthodox.

This is the internal or mystical project, which aspires to perceive what is not perceived.  It gives expression to its essence in what in Sufism is called delirium (nashwa), intoxication (sukr) or ecstasy (inkhitaf), when the "I" which is the other, is revealed.  In such a state of delirium, the Sufi achieves oneness or unity and publicly proclaims, "I am God";  in this state of delirium, the Sufi becomes aware of knowledge that has escaped knowledge.  So as much as identity is shaken and we dream that the "I" is the other, we are able to reach the invisible and to hear the inaudible, as Rimbaud says in his letter to Demeny (ibid., p.201).  Writing here is merely a stabilization of vertigo, as Rimbaud says, "I fixed vertigoes".  In his writing, Rimbaud frequently uses ords that have a symbolic Sufi meaning, such as thirst, drink, quench one's thirst, hunger, eat, 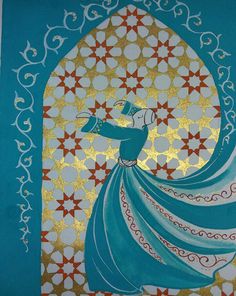 nourishment, tears, weeping and laughter, dance and madness.  These are words that translate the poet's desire to become one with existence or submit to nature, as we say today.  As the Sufi offers himself to God, the poet offers himself to the sun.  This symbolizes fusion with the original light of the world and its fire, and emancipation from all forms, in the same way as the Sufi becomes one with the divine presence ('Mauvais sang" and "Soleil et chair").

The explosion in language, which is the word picture of the explosion of the I, resembles the eruption in to words of the ecstatic pronouncement or shath, as it is known in Arab Sufism.  According to Sufi definition, the shath are words translated by the tongue to describe a love that cannot be contained or an extraordinary expression used to describe a passion that overflows by force, in which feelings and excitement boil over.

It gives expression to the condition of the seer, whether he is in the presene of the unknown or whether he feels that he is united with it.  In such a state, it is not the seer who is speaking or thinking, but a secret, which is uttered by the tongue of the seer.  Not the "I" - rather the unknown, i.e. the hidden oneness between the "I" and the world.  In such a state, the poet, like the Sufi, nullifies the "I" but the mystery , the oneness remains.  Shath is a kind of delirium of the being as a whle, not just of its material body.  It is a particular kind of delirium, which is distinct from intoxication or hallucination or delusion or illusion.  It goes beyond time and place at the same time."
-excerpt, "Sufism and Surrealism"
By Adonis, the Syrian-Lebanese poet 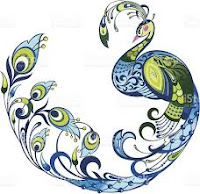 "Adonis is one of the most important major literary figures of our century. His vision is extraordinary, his poetry sublime . . . a master of our times."—V. S. Naipaul


NOTE:  "Verses" recorded along with the first 7 poems of India's Love Lyrics may be listened to here.  This is a sneak preview and will not be available on Librivox until the entire book has been recorded.
17.10.17
By Cameopoet at Tuesday, October 17, 2017