To The Unattainable - More Snake Than Charmer 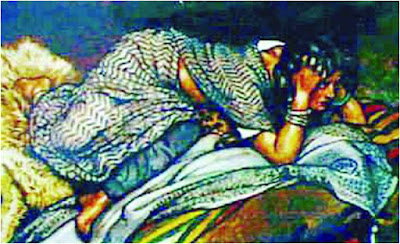 I must first remark that "To The Unattainable"  has the distinction of containing the single most difficult and downright awkwardly structured sentence in all of Hope's vast output, including her unpublished juvenalia poetry.  The second stanza is one phrase with so many asides that it ends up dangling the last word "slept" precariously, like a mountain climber hanging on a rope.  Try as I might, I could not record this in a way that sounded natural to me, but I did really try.  The word "Athirst" is archaic and means thirsty, which helps a little with untangling the first stanza.  By the time the third stanza is reached, it is a relief that it is so straightforward, if a bit quiet.

Hope again relies on stiff Thous, creating a sense of holy humbleness before the Beloved.  This second poem seems to be a supporting player for "Less Than The Dust" with a similar voice in service to self-annihilation, and the theme of shedding blood as an act of devotion.

To my ear, when spoken aloud, this poem has a very solid "Englishness" about it, despite the exotic paraphernalia.  LH has adhered fairly strictly to iambic pentameter, rather than breaking meter occasionally to relieve the rhythm.  Certainly England's greatest bard, Master Shakespeare, along with others such as Donne, Milton and perhaps Chaucer, must have been studied by young Adela as a budding poet.

In his introduction to the collection of Hope's unpublished early works, Professor Ed Marx quotes Lesley Blanch regarding our poet's education:

"The family traveled much and Adela Florence and her two sisters spent their time between European cities and a private school in London acquiring the accomplishments then encouraged.  Adela Florence (Cory) was greatly gifted, was musical, composed, played and sang and painted with considerable talent. In the studios and salons of Florence, her artistic development matured precociously, and she is said to have written many verses at this time, though none are included in her collected works. When her parents returned to India, she was marooned in England, to complete her schooling."  (Note: I cannot presently link this document, as it has been passed around only as a downloadable file.)
For at least one year at the end of her studies, and possibly earlier as well, Adela attended a private school in Britain.  Details about this last phase of her schooling were teased out of the British census by a later descendant on the Cory side, who states,

"I have only found Adela in one British census: the 1881 Census Index shows Adela F Cory, age 15, scholar, with her sister, Isabel E Cory, age 17, in a school at Richmond, Surrey. The school had 33 pupils in total and was run by Jacques Philippart, Professor of Languages (born in Belgium) and his wife Marie Philippart."

I find this part of LH's education especially intriguing and Mssr and Madam Philippart will appear again as we speculate on the possibility that young Violet was exposed to French poets, which some of her work suggests.

Overall this poem falls into the category of another of dear Violet's works which was not on my radar previously, as its rather tortured twists belie a sense that the author wrestled with it, rather than charmed it like a snake.


NOTE:  "To The Unattainable" is recorded in the first section of India's Love Lyrics and may be listened to here.  This is a sneak preview, and will not be available on Librivox until the entire book has been recorded.
11.10.17
By Cameopoet at Wednesday, October 11, 2017