Less ThanThe Dust - Alas! Thee, Thou and Thy, O Lord!


Let us begin with the ending - of the first poem that is.  The bitter last line that says "Farewell" to Zahir-ud-Din brings us to the brink of the most final act of fidelity possible - suicide.   The scene is a lover humbling themselves in masochistic fervour towards their beloved.  Is this a wanton and fatal demonstration of true love?  A supreme act of religious faith?  Or, as some believed, is it an act of genuine self-punishment by a faithless wife, offered in sorrow to her husband, a romantic military figure?  All or none may be true of this first poem of Hope's first book - "Less Than The Dust".

Zahir-ud-Din  means "Defender of the Faith" in Arabic, and Collins British Dictionary identifies this specific spelling as the common name of Baber.  Baber was a Persian conqueror of old, who lived up to his legend of being descended from both Tamerlane and Ghengis Khan by fighting his way into becoming the first Mughal Emperor of India.  This dashing fellow was called "Tiger" by his peers, and Victorian readers might have noted that he was born on St. Valentine's Day. Certainly if a girl plans to literally spill out her heart over a man, it should be a romantic warrior type, like him.

But there is another possibility - there is an argument that the poem is symbolic of the abject subjugation of one poet to another far greater, who serves as inspiration and guide.  It turns out that Zahir-al-Din was also the name of a Persian poet in the Sufi tradition, which celebrates absolute self-annihilation before the godlike Other, which is the most Holy.  "...the Sufist model is based on a desire for self-abnegation in the Other. Such negation of self seems to be necessary for the Sufi subject to be liberated from his ego/self."  (Pg. 51)  An entire study could be made of the poem's Eastern religious and philosophical subtext, but that is not our task today.  We will press on, as we are only at the threshold of our journey.

Christian readers would have known that despite the Thees, Thous, Thys and O Lords heavily on display in this piece, it was not a biblically themed work.  Western religions forbade suicide, but cloaked in Asiatic strangeness, overwrought heathen passion seemed a reasonable thing to observe, and certainly those who supported the Raj were pleased when their foreign subjects, ahem, subjected themselves to some greater force.  Thus, it was mostly acceptable to Edwardians to be enthralled or entertained with a display of unruly love-derangement, as long as it was Oriental.  And if the Eastern races loved their Lords so very deeply, was that not a redeeming quality in itself?

The heavy use of holy pronouns in this opening poem is a little unusual for Hope.  On the contrary, most of her work is suffused with a very natural, even surprisingly modern voice.  To my ear, this first poem does not partake of the wild honesty that characterises LH's signature style.   For this reason, I've always pretty much skipped over it without a second thought, as "not one of Violet's best".

No doubt the poet's publisher was a forward-thinking chap.  Even so, a hint of piety suited any new endeavour which sought approval from the fierce female rulers of Edwardian drawing rooms.  Violet also had good reasons to follow a more careful path at this juncture in her life.  Her husband the Colonel had just retired, she had just given birth to a son, and the couple had returned to England to begin a new chapter together.  Social propriety must have figured into her decision to adapt a male pen name to serve as fig leaf over her identity.

It stands to reason that the first poem of the volume, the poem that casual viewers were more likely to glance at, the poem that presumably strikes the mood and sets the tone for what is to come, should suit all sensibilities, including the morally delicate.  A saintly sounding poem might even throw do-gooders and moralists "off the scent" of further investigation.   In short, while Less Than The Dust certainly has merit as a study in Sufic inspired adoration, I believe its main function was to act as another piously ornamental fig leaf of social protection for the book, assuring readers that it was acceptable to possess.

Somerset Maugham's short story "The Colonel's Lady" and the amusing little film made of it, describe the aftermath of the publication of India's Love Lyrics in 1901 - Hope's confessional style and unexpected popularity caused her public to piece together a narrative of an affair which became a very real, if not lingering, social scandal for the poet and her Colonel.  Aside from presumed interracial infidelities with a hearthrob younger male, the volume contained verses considered almost pornographic for the era "even if written by a man!" one imagines the wagging tongues exclaiming.

"Less than the weed that grows beside thy door
Even less am I, smaller than wee tonight."

The good natured mockery demonstrates how the poem's false notes embody all that is heavy, yet trite to the ear when it comes to poesy. 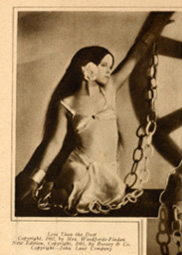 Nevertheless there is no question that Violet's racy Love Lyrics hit the right chord at the right time from London to L.A. to Delhi, inspiring the title of the Mary Pickford film Less Than the Dust (1916) as well as a film called The Indian Love Lyrics (1923) from Stoll Pictures.  Over a quarter century after publication, Motion Picture Magazine posed "It" girl Louise Brooks in chains against a chariot wheel over the same passionate verses coupled with Amy Woodeford-Finden's musical notation.

Thus Hope's unique voice and cultural preoccupations bled profusely into the pulse of Western pop culture, culminating in still familiar icons like the irresistibly exotic Shalimar Perfume, and Rudolf Valentino's "Sexy Sheik" persona, which we will encounter as we go. 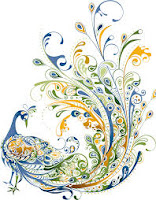 So, even though we must begin with a somewhat clunky first poem, we are now launched into the body of the Love Lyrics and have only one place to go - Up, up, upwards, towards the Eastern stars.

NOTE:  "Less Than The Dust" and the next six poems of India's Love Lyrics may be listened to here.  This is a sneak preview, and will not be available on Librivox until the entire book has been recorded.