My life was like an Aloe flower, beneath an orient sky,
Your sunshine touched it for an hour; it blossomed but to die.

Torn up, cast out, on rubbish heaps where red flames work their will
Each atom of the Aloe keeps the flower-time fragrance still. 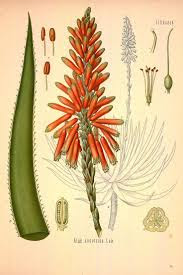 The Aloe plant holds an important place in Indian Ayurvedic medicine and has long been considered a mystical plant with uses in mummification recorded in Egypt as far back as 1550 BC.  Revered and cultivated for its almost magical seeming healing properties all over the world in warm weather climates, it does not tolerate frost well and it is unlikely that Hope ever encountered the plant prior to living "beneath an orient sky."

In this charming little piece Hope refers to herself as an Aloe flower, which is rather vibrant and quite spiky - a humorous and self-effacing jest at her own expense nested within a cluster of some of her favoured themes:

۝  The Beloved as a sun or the source of light
۝  The quick passing of youth and pleasure
۝  The tormented nature of love and desire, to the point of self-abnegation
۝  Above all - Hope's mystical leanings towards spiritual ideas from Eastern and Eastern-influenced wisdom schools which speak of each atom's everlasting connectedness to consciousness and the whole:


Hinduism -"Everything, from a particle of dust to the great galaxies reflects the glory of Brahman."

Buddism - "The Buddhist does not believe it is mind or in any one part of the body. We believe that every particle of the body—the whole..."

Sufism - "The Sky, the earth, the trees, the mountains, the land-dwelling animals and the birds, the insects, the angels, the jinn, and humans are all parts of this grand system, and it is with their cooperation that the organized system of movement runs its course.  The principle of nature is the same for each species, each individual, and each particle.  However, man is such a part of this machine, that he is aware of the machine's mechanism..."

Theosophy -  "Divine Unity – The whole of existence, all of life, is an indivisible unity or wholeness. Some call it the Divine Mind or Divine Consciousness, some God, others Nature. This Divine Unity forms the basis of the concept of Universal Brotherhood which is the first Object of the Theosophical Society."

Baha'i -  `The soul is not a combination of elements', says `Abdu'l-Bahá, `it is not composed of many atoms, it is of one indivisible substance and therefore eternal. It is wholly extraneous to the order of physical creation: it is immortal."

Regarding Walt Whitman:  ..."to the measure that the consciousness becomes emptied of its makeup, gradually the I becomes nothing and everything.  Then the poet-mystic talks of himself in the humblest terms, now in the most self-exalting language."

Even contemporary Science recognizes a similar principle in holograms, wherein every particle reflects the whole image, serving as a metaphor for individual and mass consciousness.

Which no doubt would greatly please our humble, yet vibrant and spiky poet.


NOTE:  "The Aloe" is recorded in the fifth section of India's Love Lyrics and may be listened to here.  This is a sneak preview, and will not be available  on Librivox until the entire book has been recorded.
13.2.18