Farewell - The Mystery of the Aziz/a and Mahomed Akram Triangle

Farewell, Aziz, it was not mine to fold you
Against my heart for any length of days.
I had no loveliness, alas, to hold you,
No siren voice, no charm that lovers praise.

First let's note some of the connections between other poems to Farewell, an intense and prayerful devotional offering to a disappearing Beloved who has apparently granted one night of passion to the self-abasing speaker :

- This poem is addressed to "Aziz" which, according to scholar Anindyo Roy, literally translates to "beloved of God" in Arabic.

-Aziz is the masculine form of the name, but two subsequent poems in India's Love Lyrics - Prayer and Memory - address the feminine form "Aziza".  This leaves open the possibility that Aziza is not a female, but instead a feminized "pet name" of Aziz, spoken in affection.  Of course the Aziza poems, especially the exquisite Memory, helped spark the rumors that the unmasked female poet herself had sexual ties with women, including the composer Amy Woodford Finden who she corresponded with but, as far as I have ascertained, never met.

- Whether Aziz in "Farewell" is being addressed by the actual female poet or a male narrator (as the pen name of Laurence Hope suggests) or another unnamed male (such as Mahomed Akram as discussed below) or some other female familiar to him (as would be considered proper) is an example of one of the enduring mysteries and most intriguing charms of Adela Nicolson's tangled melange of imagination and art - we just don't really know, and ultimately each reader gets to decide according to their own impulses and tastes.

- There are five Mahomed Akram poems in India's Love Lyrics, the most often recurring signature name in the book (as opposed to Lalla-ji or Valgovind).   In Hope's next book Stars of the Desert  Mahomed Akram is the signatory of three poems, one of which unites the Aziz/Akram themes in "To Aziz: Song of Mahomed Akram".  This is presumed to be a male addressing a male (written by a woman assuming a male name it must be remembered).

- In Stars of the Desert Aziz appears more fully fleshed out as a reverent male slave of another man in "Devotion of Aziz to Mir Khan".   The pair must part, and Aziz's adoration for his Master far exceeds that of the superficial affection offered by the women he has observed Mir Khan trifling with.  Aziz's devotion is of the painfully transporting ecstatic variety found in every Mahomed Akram poem and prayer of the Love Lyrics.

So to complicate matters, it seems Hope is celebrating a certain type of unusual love in at least one of the Mahomed Akram and Aziz/a poems - that of slave for Master.  While this might seem almost impossible to Westerners and Easterners alike in the modern era, the acceptance of a position of exalted slavery in times past when it was institutionalized is not to be dismissed.   India had a long tradition of slaves and masters well before the arrival of Europeans, and the intimacy that may arise between a trusted slave and a master who is attractive or perhaps gentle or appreciative may develop as a point of survival for the slave, a kind of solace in the daily life of servitude, and also as an adjunct to some Eastern religious principles which combine the ideas of humility, reincarnation, and acceptance of fate.

Ah, that one night! I think Love's very essence
Distilled itself from out my joy and pain,
Like tropical trees, whose fervid inflorescence
Glows, gleams, and dies, never to bloom again.

The effects of repressed desires upon the mental outlook of those in societies that greatly emphasized and rewarded sexual abstinence for long periods of time in military and civilian service adult males - as both the Muslim and Victorian Ango-British did - cannot be disregarded.  Relaxed modern attitudes make it very hard for most of us to imagine what surreal and disproportionate dimensions the yearning to conduct just one act of love with someone who is genuinely desired would take on.  The only parallel left to us in modern society (fast fading now) is that of the closeted homosexual, who in decades and centuries past may have included individuals that waited years to finally act on their true desires, and who may never have hoped to repeat that act again due to circumstance. 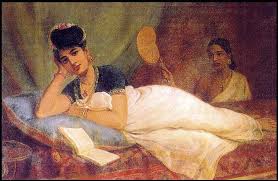 It seems that Hope conducted one of the modern era's first explorations over an entire body of work of what today we'd fashionably term "gender fluidity".   Though this dimension of Hope's work is not immediately obvious to the casual reader, this poem "Farewell" begins the tease with Aziz's first appearance, then just four poems later his anima Aziza is encountered, cozied up next to a soulful Mahomed Akram poem sandwiched right between the pair.

Thus Hope entangles the unsuspecting reader into a complex and multi-dimensional ménage à trois indeed, the mystery of which must have intrigued and hit home with a certain number of Western readers, accounting in part for her work's explosive popularity and acceptance.

NOTE:  "Farewell" is recorded in the fourth section of India's Love Lyrics and may be listened to here.  This is a sneak preview, and will not be available  on Librivox until the entire book has been recorded.